The City of Inglewood 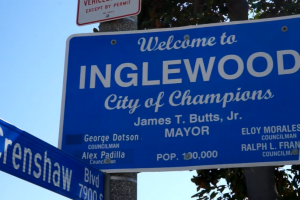 The City of Inglewood

The City of Inglewood commonly referred to as “The City of Champions”, is a southwestern city in the LA metropolitan area, which is actually in the South Bay area of LA County.  Only 2.5 miles from LAX, 12 miles to Hollywood 15 miles from Downtown LA, and 23 miles to the Port of Los Angeles and Long Beach, Inglewood is one of the most centrally located cities in all of LA. With easy access to the 110, 105 & 405 freeways, Inglewood is also a great hub from which to navigate the oftentimes burdensome sprawl of living in LA.  Inglewood is also 4-7 degrees cooler than LA as a whole being less than 8 miles from the beach and the cooling breezes of the Pacific Ocean.  The Forum is also located in Inglewood and was the home of the Los Angeles Lakers, LA Kings from 1967 to 1999.  Today the Forum is home to many top-rated concerts and special events.

New Stadium Comes to the City of Inglewood

Since the announcement in 2016 that Inglewood would become the chosen location of the new 5 billion dollar SoFi Stadium and Entertainment District, the city has become the fastest appreciating housing market in the entire LA metro area, with home values being up 63% since 2014.  As the new home of both the LA Rams and LA Chargers and the site of future global events such as the Super Bowl in 2022, NCAA Championship game in 2023, World Cup in 2026, and both the opening and closing ceremonies of the 2028 Olympics, the City of Inglewood is poised to become an international destination representing So Cal living in the 21st century and the talk of LA for years to come.

From this site, you can search all of the available homes, condos and multi-unit buildings in the Inglewood area including North Inglewood, Fairview Heights, Morningside Park, and Century Heights neighborhoods.  Another feature of our website is instant home valuations sent to your inbox just by typing in your property address.  All of this can be done, free of charge and of course, without any obligation. When you have made a decision to buy or sell and are ready to speak to someone, let us know and you will be contacted by a licensed REALTOR® (member in good standing of the National Association of REALTORS®).  We at InglewoodHomeValues want to alleviate the stress that can come with buying or selling a home.  Our goal is to make the process as smooth and seamless as possible.

Stay Up to Date on the Inglewood Market

We hope you enjoy our website and return often as both the overall market and available inventories within are continually changing.  By visiting frequently, you will be able to stay on top of both current inventory and the trends that affect property values throughout the area.  We want InglewoodHomeValues to be your website of choice for buying and selling homes in the City of Inglewood.